Local 10 sheet metal apprentices have been going through their version of mid-term exams. More accurately, it’s a contest between the different classes but it serves an important function – it’s a barometer for each apprentice to check where their skills levels are in the different disciplines that a qualified journey worker needs to know.

During one week in February there were three groups competing. These groups were split up by classes: first year Commercial, second year Industrial and those apprentices in the Architectural sheet metal class.

Each class has different skills associated with common duties and applications in its area of focus. For example, the HVAC apprentices do a “duct run” they would perform in building a residential home. Ducts in a home are those silver-colored ducts near the ceiling that bring air from the air conditioning or furnace throughout a home to keep you cool in the summer or warm in the winter. They draw out the run, lay it out and then build it by bending and installing the metal.

The other classes get judged on the nuances of their specialties. The Industrial class gets tested on their welding abilities. The Architectural class designs and makes a rain cap for a chimney or a furnace exhaust. But what all three have in common is some knowledge in the use of computer assisted drawing (CAD).

“This keeps everybody on their toes and judges where they are at,” says Cory Nelson, Metro Area Sheet Metal JATC apprenticeship coordinator. “The students enjoy the friendly competition. These guys love it.”

This Labor Day 2021 public approval of labor unions is at a generational high. A poll released by Gallup Sept. 2 shows 68% of Americans approve of labor unions, the highest level since 1965. According to the poll, 17% of Americans live in a union household and 10% of Americans with incomes above $40,000 are union members. For those making under $40,000, union support rates at 72%. Union favorability is striking high amongst young Americans (ages 18-34) at 77%.

Through Labor Day members of the union building trades manned the AFL-CIO meet-and-greet and information exhibit at the corner of Dan Patch Avenue and Cooper Street at Minnesota State Fair, back after a COVID-related hiatus in 2020.

LiUNA organizer Octavio Chung Bustamante was one union trades member who worked the fair this year. He said he wasn’t surprised by the high marks in the poll. “It is because people realize we are for good benefits with a good pension. Plus we offer great training for our members so they can do the best possible job.”

Todd Dahlstrom, Organizing/Growth Director of the Minnesota AFL-CIO, thought that through the pandemic worker safety became an issue and unions make a difference for their members. “Having a seat at the table was important to keep workers safe during these trying times the last two years,” he said.

“Essential workers” is a phrase Americans have become familiar with during this era and union trades members have proven themselves to be just that. Added Dahlstrom, “Union trades do all the things that make the world work.”

The country’s late night TV entertainment has its Jimmys (Fallon and Kimmel) and a Conan (O’Brien). But, he Minnesota Building Trades has its Larry. Larry Gilbertson, the president of the Apprenticeship Coordinators Association, once again emceed the 14th Annual Injured Apprentice Dinner at Mancini’s Restaurant Monday night, Feb. 3. The annual affair raises money for the injured apprentices fund. While the mission is serious, the accompanying program always has some humor injected into it when the Gilbertson slips into stand up comedy mode: “That reminds me of a joke I heard….”

“We like to think of ourselves as a family, maybe a big, dysfunctional family, but a family nonetheless’” Gilbertson joked afterwards. “And so we need to take care of our younger brothers and sisters, especially if they are just starting out in the trades. If they are apprentices in their first couple of years, they don’t have a nest egg built up yet like some of the journeyworkers would.”

If an apprentice gets hurt and they are off the job for more than 30 days, he or she can get a check to be used for wherever they need it. The money can be used to help pay the bills, pay the rent; it’s something to get them over the hump until they are back to work again.

Last year the fund paid out 19-20 checks to members of 12 different trades most of whom were injured off the job and thus ineligible for worker’s comp, according to Gilbertson. “Especially when you are coming into the Holiday Season and any other time when you need to have that extra cash flow, a check for $595 can really help those young folks out.”

“Off the job we are all outdoors people/folks. We’re out on snowmobilers, four wheelers, motorcycles. Sometimes those checks are going to someone who was injured in a vehicle accident,” Gilbertson explained.

“We get a great commitment from all the trades. All day long the people who are here tonight – the coordinators, the instructors, the business agents, the business managers – they work all day long helping out our apprentices yet still make time on a Monday night to help them out even more.” 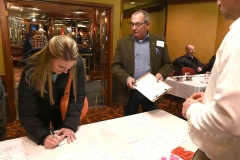 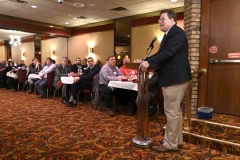 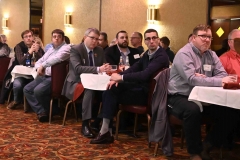 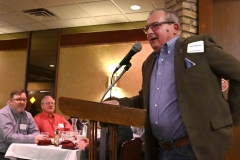 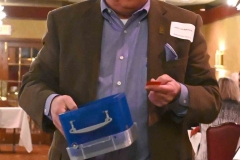 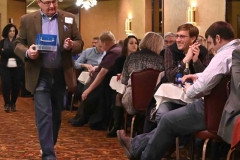 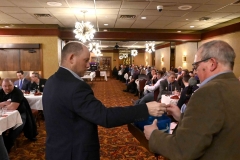 When it was announced the Trades Women Build Nations Conference was coming to the Twin Cities, Minneapolis Building Trades Director of Marketing & Public Relations Jenny Winklaaar suggested one speaker she thought they should get — the only octogenarian in the United States so renown she has her own hip-hop nickname, the Notorious RBG, Supreme Court Justice Ruth Bader Ginsburg.

After submitting a formal request through a national association of lawyers (which went nowhere), Winklaar did her own research and called the United States Supreme Court. She selected the “Clerk of Court” option from the menu. The phone was accidentally answered by someone trying to dial out who hadn’t listened for the dial tone first. Winklaar said, “Hello.” A voice on the other end answered her back: “Hello… Who is this?” Winklaar introduced herself and told The Voice on the other end of the phone she wondered how one could request a Supreme Court justice to speak at an event. “… What?!” The Voice replied.

Winklaar explained a women’s conference was coming to Minneapolis, Minnesota, and they’d like Justice Ginsburg to speak at the event. The Voice put her on hold, but returned two minutes later with another person conferenced into the call. That led to another round on hold with yet a third person joining the conference call who said, “I’d like you to say your name; I’d like you to spell your name, and I’d like to give me the address from which you’re calling.” About that time Winklaar wondered if the FBI wasn’t on their way to detain her.

Eventually she was put through to the assistant to Justice Ginsburg who listened to her request and invited her to submit it via a special email address. Within 48 hours after sending the email, she got a personal response from RBG. With the Supreme Court starting their session, she wrote, she wouldn’t be able to attend in person. In lieu of that, she offered to do a special video address for the opening of the conference.

Looking back, Winklaar thought the women at the event “were really encouraged that RBG took time out of her schedule to encourage them.”

Vicki O’Leary, Chairwoman of North America’s Building Trades Unions (NABTU) Tradeswomen’s Committee, was standing in the back of the room waiting to be introduced as the next speaker when Ginburg’s video played for the crowd. “The young apprentices had tears in their eyes,” O’Leary recalls. “It was incredible to see how young women were made to feel like they had that sort of support.”